A radial drilling, also known as radial arm press machine, is one of the most common and useful machines employed in the industry. It has a geared drill head that is placed on an arm assembly. This arm assembly can be moved around to the extent of its arms reach. Some of the advanced uses of the machine include reaming, tapping, spot facing and counter drilling. The drilling machine is meant for drilling small to large and heavy workpieces. Radial Drill Machine consists of the following parts: 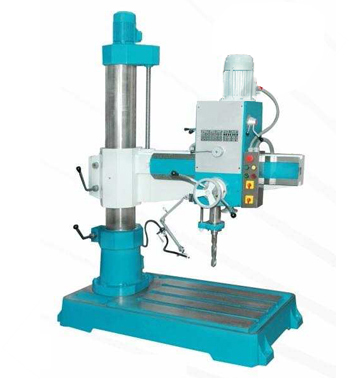 Working: The workpiece is fixed on the table. Height and reach of the radial arm are adjusted before starting the drilling process. Once everything is arranged, the drill is turned on and the drill chuck is lowered with help of a radial drill. The hole is generated in a workpiece by exerting large force via drill head as it is lowered. This large force is resultant of high-speed rotation drill head. The drilling of hole and removal of metal is resultant of shearing and extrusion.

Radial drill machine is an efficient and easy-to-use machine. There are a number of advantages of using the radial arm drill press. One of these advantages is that radial is free to move around during drill. This flexible movement provides a large amount of area that it can cover which is only dependent on the length of the arm. Another advantage is the high rate of production that it allows since the arm can actually swivel out of the working area allowing cranes and derricks to quickly place workpieces on the table.